St Thomas, one of the apostles of Christ, after receiving the Holy Spirit at Pentecost, set about the mission of spreading the gospel of Jesus Christ to the whole world. A review of the life of St Thomas will prove how he fulfilled this great mission in India.

According to the tradition, St Thomas came by sea and landed at Kodungalloor (Cranganore) the capital of the then Chera Empire in the year 52 A.D. He baptised families in Kodungalloor and Palayur (Trichur). St Thomas preached the gospel wherever he went, and founded churches. According to Malabar tradition St Thomas founded seven churches, they are in Cranganore, Quilon, Chayal, Kokkamangalam, Niranam, Paravur and Palayur. From there he went to Coromandel and suffered martyrdom near the Little Mount in Tamilnadu. His body was brought to the town of Mylapore and was buried in a holy shrine.According to “Ramban songs” St Thomas converted 17550 people. He ordained priests and consecrated Bishops. The Apostle consecrated Kepa, a native, as Bishop of Kodungalloor and as the head of St Thomas Christians and Paul as the Bishop of Mylapore. It is worth mentioning that the Apostle gave his followers a way of worship suited to their clime, culture and customs. Since 4th century, the Church in India started communication with the East Syrian Church and soon began to introduce Liturgical books and share rites. Thus the Indian Church became a member of the Syro-Chaldean Patriarchate for practical purpose, not for doctrinal reasons.

The head of the Indian Church was called The Metropolitan and Gate of All India and had jurisdiction all over the country. When the Chaldean prelates came to India as the spiritual heads of the independent Metropolitan provinces under the East Syrian Patriarch, the administration of the Indian Church was done by a native priest with the title Archdeacon of all India or Jathikkukarthavian. The residence of the Metropolitan was first at Kodungallur, then Angamaly etc.. Because of the close association of the St Thomas Christians with the East Syrian Church, the Indian Church of St Thomas is classified in history under the Chaldean matrix of rites, as we read in CCEO C.28:2 As Pope Pius XII said “during the centuries that India was cut off from the west and despite many trying vicissitudes, the Christian communities formed by the Apostle conserved intact the legacy he left them, and as soon as the sea passage at the close of the 15th century offered a link with their fellow Christians of the west, the union with them was spontaneous (AAS, XLV (1953) PP. 96 97). Thus the Syro-Malabar Church, as Pope John Paul II said, “Never severed from the communion with the Church of Rome, in a continuity that the enormous geographic distance has never been able to break. (“Insegnamenti Giovanni Paulo II.” III/2. Roma, 1980, P. 513). In the XV and XVI centuries the Metropolitans of the St Thomas Christians, who were then East Syrians, took Angamaly as their residential See. (cf. Bulls of Pope Julius III dated 10 March 1553 and 4 May 1553 in Giamil, “Genuinae Relationes…..” Rome 1902, PP. 17-18-24).

In the history of the St Thomas Christians the arrival of the Portuguese missionaries to India during the 16th century was a turning point. The western missionaries helped the growth of the Indian Church, at the same time it also distorted the juridical and liturgical identity of the St Thomas Christians. After the Synod of Udayam-peroor (Diamper) in the year 1599, Mgr. Francis Roz, a Portuguese missionary, was appointed the first Latin Bishop for the Metropolitan See of St Thomas Christians. On the 4th of August, 1600 the Portuguese Padroado jurisdiction was extended to Kodungalloor & Archdiocese of Angamaly was reduced as a suffragan to the Archdiocese Goa. The residential See of the bishop was transferred from Angamaly to Kodungalloor in 1607 in the light of the letter of permission of Pope Paul V, dated 20th August 1605. On December 22nd, 1608, the Metropolitan status of the See of Kodungalloor was restored by Pope Paul V. He ordered the geographical division of Cochin and Kodungalloor Angamaly (cf. Bull of Pope Paul V dated, 12th October, 1609 “Bullarium Patronatus Portugalliae” Vol II, P. 14) as a compromise formula for settling a jurisdictional dispute between the Bishop of Cochin and Bishop Francis Roz of Kodungalloor – Angamaly. On 22nd December 1610 Archbishop Menezes of Goa issued a decree restricting the jurisdictional rights of the Metropolitan of St Thomas Christians to certain areas in the present states of Kerala, Karnataka, Tamilnadu and Andhra Pradesh (cf. “Bullarium Romanum……” Vol. XI PP. 606-608)

The Policy of latinisation by the missionaries caused dispute and resistance among the St Thomas Christians and it resulted in a revolt in the year 1653 called “Coonan Cross Oath” and the ensuing fraction of Puthenkoottukar. To remedy this situation the Propaganda jurisdiction was also introduced on the St Thomas Christians. The St Thomas Christians were then divided among themselves under the two Latin Jurisdictions of Padroado and Propaganda. And the rebel bishops who headed the Puthenkoottukar in course of time separated themselves from the Catholic communion and became Jacobites. In the 18th century the Metropolitan residence of Cranganore was transffered to the neighbouring catholic centre, Puthenchira.

In 1865 the jurisdiction of the East Syrian Patriarch over the Church of the St Thomas Christians was formally terminated by the Apostolic See. In 1886 the Metropolitan See of Cranganore was suppressed and the St Thomas Christians were put under Verapoly which was later raised to the status of an Archdiocese with the establishment of the Latin Hierarchy in India under the Propaganda Fide. The title of ‘Metropolitan of Cranganore’ was given ad honorem to the Bishop of Damao. When the See of Damao was annexed to that of Goa the Goan Archbishop began to carry the title of Cranganore also.

On 20 May 1887, Pope Leo XIII of illustrious memory by the bull Quod Jampridem reorganised the St Thomas Christians under two vicariates of Trichur and Kottayam. On 28 July 1896 by the bull Quae rei sacrae, the same Pope reconstuted the two vicariates into three vicariates of Trichur, Ernakulam and Changanacherry and appointed natives as bishops. These Catholic St Thomas Christians were then called ‘The Syro-Malabar Church’. In 1911 the Vicariate Apostolic of Kottayam was erected for the Southists. By the epoch making constitution Romani Pontifices of 21st December 1923, Pope Pius XI erected the Syro-Malabar Hierarchy and thus restored, to some extent, the hierarchical rule of the St Thomas Christians. But the form of Government was that of a Latin Metropolitan Province. Ernakulam was raised to the Metropolitan status and the eparchies of Trichur, Changanacherry and Kottayam were made its suffragans. In 1955 the territory of jurisdiction was extended to some districts in Tamil Nadu and Karnataka. In 1956 Changanacherry also was raised to the Metropolitan status. By the time the number of eparchies had increased to seven.

The growth of the Syro-Malabar Church in the twentieth century is widely admitted as marvellous. This energetic Church took up challenges in the Mission fields and thus from 1962 Syro-Malabar Exarchates began to be established outside Kerala. In 1977 the Exarchates were elevated to the status of Eparchies.

The Syro-Malabar Church, having 12 eparchies in Kerala under two Metropolitans – Ernakulam and Changanacherry – and 9 eparchies outside Kerala under Latin Provinces, was found in an anomalous situation when CCEO was promulgated in 1990. Taking into consideration the age old traditions and the enormous growth of the Apostolic and Indian Church and in order to rectify the above anomaly, Pope John Paul II, by the constitution “Quae Maiori”, dated 16 December 1992, raised the Syro-Malabar Church to the status of Major Archiepiscopal Sui iuris Church with the title of Ernakulam – Angamaly. The erection was published on 29 January 1993. The Metropolitan of Ernakulam, Mar Antony Cardinal Padiyara, was made the Major Archbishop. The proper territory of the Major Archbishop was determined to the territory of the two provinces of Ernakulam and Changanacherry. The Installation of the Major Archbishop and the inauguration of the first Synod of Bishops of the Syro-Malabar Major Archiepiscopal Church was held at Ernakulam on 20 May 1993. In 1995 the Eparchies of Trichur and Tellicerry were elevated to the Metropolitan status. A new eparchy of Thuckalay was erected in 1996 in the province of Changanacherry. Bifurcating Tellicherry, the eparchy of Belthangady was erected in 1999. Another Eparchy was erected in Chicago for the Syro-Malabar migrants in February 2001. It is considered to be a remarkable event and milestone in the history of the Syro-Malabar Church. Similarly, the new eparchy of Idukki was erected in January 2003. On 21st August 2007 a new Eparchy of Badravathi was erected, bifurcating the Diocese of Mananthavady. Two new Eparchies, Ramanatha-puram and Mandia erected on February 2010. At present the Syro-Malabar Major Archiepiscopal Church is having 18 Eparchies inside its proper territory under 5 Metropolitan sees and 11 Eparchies outside the proper territory. 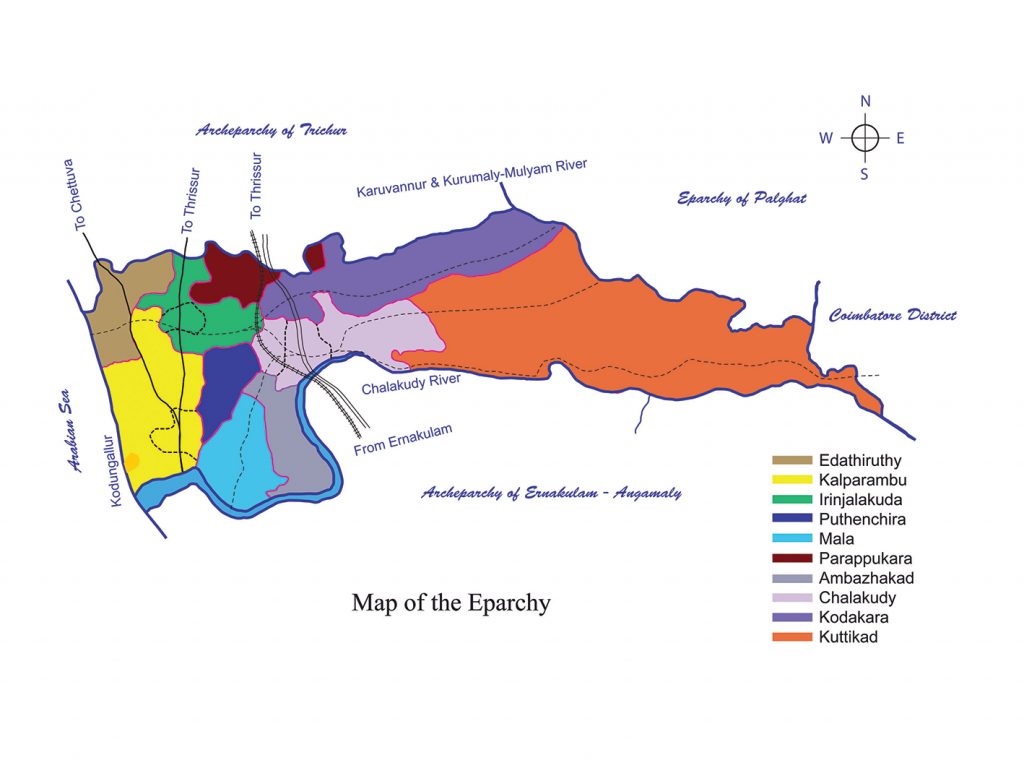